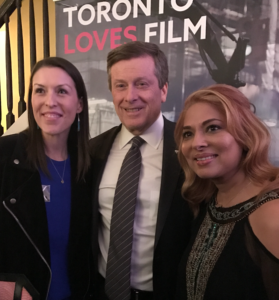 Toronto Mayor John Tory has spent the past week in Los Angeles to increase Toronto’s profile as a first-rate production location. This mission has been a huge success increasing awareness of Toronto to production companies both new and established. The community as a whole came together to work with Tory to showcase the talent and varied production while the Mayor presented his five-point plan to decision makers in the screen production business.
The film & television production industry brings over $800 million in investments to Toronto. This mission has helped to strengthen relationships and carve a path to grow that investment over the next year.
Neishaw Ali, President and Executive Producer at SPINVFX collaborated with the delegation of 22 companies and organizations to bring this mission to life.