Spin announces the scope of their work in M. Night Shyamalan’s sci-fi action adventure After Earth for Columbia Pictures.

sequence involved establishing the pod’s that would transport the mass exodus of humanity beyond the Solar System to the new world of Nova Prime. The second environment featured the damaged Hesper spacecraft after it crash landed in a crevice on the now quarantined planet – Earth.

“Creating photoreal environments were key, so we decided early on that we would not skimp on the details. Our Asset team based the build of the pod’s on real world structures of similar size and scope, adding scrapes, staining, imperfections in glass and panels, to look like it has travelled back and forth to space many times. Once w 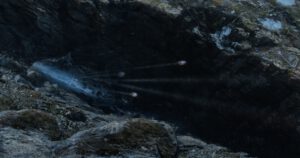 All 3D was modeled in Maya, textured in Mari, lighting and look development in Katana and rendered using RenderMan. Massive completed the tool kit for the 3D crowd system.

“After Earth was a great collaborative experience. These were big shots and the team is extremely proud of our accomplishments”, says Spin Senior VFX Producer, George Macri (Blood Diamond, The Last Samurai)

The production VFX team was headed by VFX Supervisor Jonathan Rothbart and Producer Jenny Fulle of the Creative Cartel.