Strange things have been happening at SpinVFX!

Our team delivered over 130 shots for the third season of the critically acclaimed series, Stranger Things.

Among these was the opening sequence inside of the mysterious Russian lab, which we created as a fully CG environment, complete with CG characters and the machine. The Duffer Brothers called it “jaw-dropping” and one of their “favourite sequences”.

As long-time fans of the series, we look forward to the coming season. 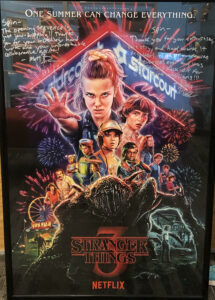