Mayor John Tory lead the charge to bring more Film and Television business to Toronto, an industry that contributed more than $2 billion to the city’s economy in 2016. SpinVFX’s President and Partner Neishaw Ali  is part of the delegation promoting Toronto as a destination for the creative arts industries and introduced John Tory as he met with the press. In his speech Mayor Tory discussed the plan to streamline regulations and make Toronto a competitive global filming and digital production destination.

Following the Mayor’s announcement on February 27th, Neishaw was a guest on CBC’s Metro Morning with Matt Galloway on February 28.th The interview focused on the immense opportunities for the creative industries such as animation and visual effects in Toronto.

Further details from The Globe & Mail. 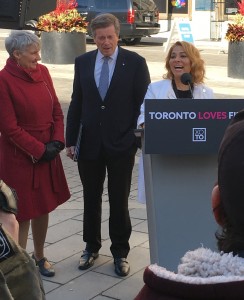