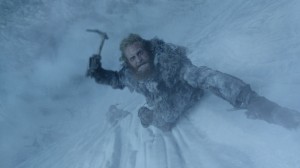 After explaining the work of Spin VFX on the TV series THE BORGIAS in a recent Art of VFX interview, Doug Campbell has worked as a senior compositor on THE TWILIGHT SAGA: BREAKING DAWN PART 2  and JACK REACHER. He now talks about his work on the third season of GAME OF THRONES.

How did Spin VFX get involved on this show?
For years, SPIN has been developing a relationship with HBO because their shows are very provocative and they bring cinematic quality to Television. GAME OF THRONES is especially dear to us as most, if not all, of our staff are huge fans and given that level of passion, we knew that the synergy would be great. We approached HBO right when they were developing the GAME OF THRONES and two years later, the opportunity arose for us to work together.

How was the collaboration with the various directors?
Our collaboration was mainly with the VFX Supervisor, Joe Bauer and VFX Producer, Steve Kullback, who maintains creative integrity of the show.

What was their approaches about the visual effects?
It was of the utmost importance to maintain feature film quality and so much of the process was typical of working on a large scale film. Productions’ art department created very beautiful concepts for Season Three and there was also a lot of great reference material from earlier seasons to draw upon. Joe Bauer, the VFX Supervisor for production, had also done some very nice photoshop work and collected a large quantity of additional reference material to illustrate where he wanted to go with the shots. Additionally, he supplied detailed previs which was used to aid us and to drive the motion control cameras. This all helped tremendously.

How was the collaboration with Production VFX Supervisor Joe Bauer?
Joe was great to work with. He has a great eye and inspiring creative direction. Without him we would not have gotten the results we did.

What have you done on this show?
Mance Rayder’s Camp and the Giants within it, the flocks of ravens and the three-eyed ravens, Eagles, Dire Wolves, 1000′s of Unsullied Soldiers, many set extensions, The Twins, the Red Wedding sequence, the Base of the Wall, the entire scaling of the Ice Wall sequence, and the top of the Wall.

Read More of this article: Art of VFX