Spin VFX announced today the scope of their work on Season 3 of The Borgias (Showtime/Bravo).

“Working with Neil Jordan, Take 5 and the entire production team has been a delight. Together, we have pushed the boundaries of feature quality period environments on a television schedule. It has been a fruitful collaboration and we look forward to producing future shows together”, says Neishaw Ali, Spin President and Visual Effects Executive Producer (Game of Thrones, The Twilight Saga: Breaking Dawn)

Spin created the Italian Renaissance world for the three seasons of The Borgias. Visual effects widened the visual scope through the creation of geographically accurate 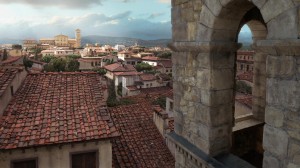 landscapes, extension of physical sets, augmenting the size and density of crowds, as well as enhancing action with particle simulations and dynamics to sell the warfare and destruction of the era. 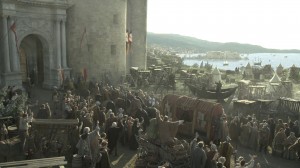 ets and locations on the front end, was key to taking the viewer into the period of the time. Our team was meticulous at researching the Italian Renaissance. Developing dynamics and particle simulations for destruction and the battlements was also challenging, but loads of fun”, says Wojciech Zielinski, VFX Supervisor (Fast & Furious, Silent Hill)

Maya was used for 3D modelling, Mari for textures, lighting and look development in Katana and rendered in RenderMan. Massive was used for the 3D crowd system.

Over 1000 shots were delivered across all three seasons. Doug Campbell, VFX Supervisor and Luke Groves, VFX Producer led the team in the first and second seasons. Combined, Spin’s VFX team has garnered:

Conceived and written by Showrunner Neil Jordan, The Borgias is produced by Take 5 Productions, Octagon Films and Mid Atlantic Films.