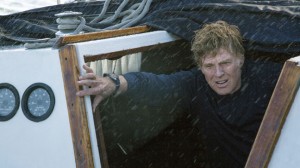 film afloat, even as his character has no such luck with his boat, in All Is Lost, a rugged, virtually dialogue-free survival-at-sea story that sustains attention against considerable odds. Some may dub it Life of Pi without the tiger, but while the stranded seafarer situation is the same, the intent and tone are decidedly different.J.C. Chandor, whose excellent first feature Margin Call was most distinguished by its terrific dialogue, goes the opposite way here with a Hemingwayesque story devoted entirely to physical externals.